Showing posts from February, 2007
Show all

Love IS all there is!

Just when you least expect it, miracles happen. Your beloved stands before you. Your spirits meld together. Everything seems right.

Wow...really profound, right? So, why do we wait till once a year to tell those we love that we love them? I have always been bothered by this holi/holyday...St. Valentine's Day, because of this. My feeling is, if you live your life correctly, every day is St. Valentine's Day!
That said, I want to share a few of the poems I have written about "love"...all kinds of love...Enjoy!

To love a body
is fleeting.
Age eventually pushes Youth away…
crow’s feet
smile lines
bumps
and bulges
emerge where once
a nubile form held court.

But,
To Love a Soul
is to find Ecstasy!
Time stands still
as Eternity waltzes in…
the edges of being touch…
filling space…
joining other s…
3 comments
Read more 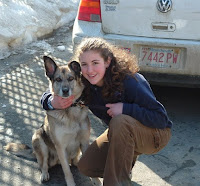 Molly is the fourth canine to have come into my family. She is a beautiful German shepherd mix with a touch of wolf. Molly is Roger's dog, but she has adopted me, too. She is very protective, watching carefully to make sure I am safe when Roger is not around. But this isn't a Molly story, it's a story about the other furry friends I've had.

Dozo, a collie/shepherd mix was my first four-legged friend. I found him in a small cage at the pound. He looked up at me with huge brown eyes when I said, "Hey, boy, you want to go home?"

Dozo lived with me and my first husband through the birth of all our daughters. He was so good with the children. They would nap on him and he would not move until they woke up. If I tried to move them, he got upset, sulking under their cribs. When I brought home my youngest daughter, Dozo met me at the door, took one look at the new baby and gave a huge sigh as if to say, "Ok, come on in, another one isn't going to matter."

February 06, 2007
Click on this link for a treat by Sissel and Josh Groban. This was filmed at the Nobel Peace Awards.