Showing posts from September, 2008
Show all 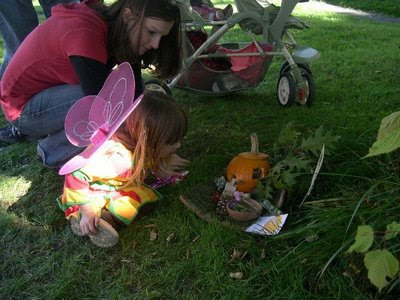 Are you home Fairies?

Last week, I celebrated another natal anniversary. The highlight of the week was gathering with all my daughters and granddaughters for the Annual Fairy House Tours in Portsmouth, NH.

What fun it was to watch as my oldest granddaughter peeked into a fairy house and called, "Fairies, are you in there?" Her unconditional belief in the possibility of fairies, elves, and other ephemeral beings is a delight. She has yet to be jaded by the barrage of reality programing. She has yet to be told "the truth" about fantasy and make-believe. It was good for all present at our gathering to witness and support her visit to the Fairy Houses.

Wait till I get this working!


When the girls were little, I would tell them, "If you don't believe in the magic, it doesn't happen." It is something they all remember, and to this day, follow.


Momma Fairy and her two Pixies

Last week, hope was restored. Last week, as I listened, tears spilling from the corners of my eyes, my dreams began to grow once more. Last week, as Barack Obama gave his acceptance speech as the Democratic candidate for President of these United States, possibilities for change sprang into being.